It's always too difficult to choose a multi-level marketing plan, as there are many plans available within the marketing world! Marketing business is one of the most complex and tensed part in an entrepreneur's life and surviving is the ultimate aim. Well, if you got into the marketing business and struggling to opt the best marketing plan then, this is the perfect place to understand about each of the plans and choose the best one that suits your business.

Here is a guideline about the various Multi-level marketing plans and a brief note on it as inference.

One of the most prominent plans that the world market has ever witnessed, a simple understanding of the plan will do it. This is the best part of having such a plan in the system, the ability in simple essence!

Working on a plan and technically spicing up things isn't that simple to guide forward. Unilevel plan is recon as a simple plan with a single row structure and for the best explanation let's consider an example.

Consider Alex joins the network and he chose to roll in with the Uni-level plan, he got joined under the reference of Mr. Green and now that the sponsor is Mr. Green, Alex is placed right beneath him. 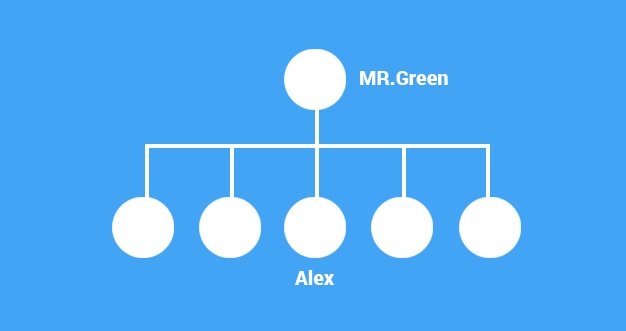 Now, by choosing a package (available packages are silver, bronze, gold, and platinum) Alex becomes a part of the network. Now, with his efforts and ability, the network keeps growing and if so what might be the structure of the chosen network? Yes, it's uni-level plan and a single row structure is a frontal pattern! Just like the picture below,

The new members are placed directly under Alex and similar sort of routine is followed throughout the network. With various compensations and bonus structure, the plan is effective for many business types. The common compensation structure looks alike,

Level commissions: The commissions are set off once the downline member line-up completes a set of criteria and useful for the upline members too.

Fast start bonus: Bonus achieved for gaining the member joins in a quick round of time, meeting the time period and a certain level of member level completion.

Leadership bonus pool: A type of quarterly/yearly bonus available for top-level members as a part of creating a leadership awareness.

Coded bonus: Bonus available in accordance with the designation relations between others as a part of the motivation.

That's all about the uni-level plan and it suits best for e-commerce based business for the best profit ratio's.

Binary MLM plan deals more with a tree-like structure with basically two legs - 'left leg and right leg'. And just like the way explained in the above plan, we'll demonstrate the working of such an advanced plan using an example.

Alex is back with a new plan in another network, and this time he joins under Mr. Blue, here the game is different.

So, Alex gets into the network by choosing a package like before (yes, one can enter into multiple plans at a single time). After enrolling in he is dropped under Mr. Blue, and we know how useful Alex is in a network because enlarges the concerned network within no time.

Alex quickly brings in new members and here as we mentioned earlier things are quite difficult from the uni-level plan. The first two members are placed on the left leg and then the right leg respectively. This is the order in which the plan working module works.

After the first level of members is completed, the next members go down to the left leg node (remember what we have mentioned earlier, left - right priority). The two new people are aligned with left and right respectively and then the next ones to the right leg of the first level nodes. This is the basic working structure and now into the commission structure, where a process is carried out naming - “weak leg analysis”. Here, a comparison is made between the left and right leg simultaneously. And here a complete scan of their sales rate is compared. And as the process name indicate, the leg with weak sales rate is compared and contradicted.

If the left leg makes $250 and the other one $200 then, the weak leg (right leg) is taken in for providing compensation and commission.

This is how the Binary plan works and yes, spillover can be made if the levels are overflowing.

And here in this plan, there are bonuses and compensation structure available for every stage of the marketing business network growth.

Let's take a look at it.

Matching bonus: The bonus received for adding new members in the downline and possibly available for upper-level members.

Yup, there are certain levels of resemblance in the basic bonus and commission set off’s.

That's all about the Binary plan and spillover binary plan is a variant of this particular plan.

Let's move on to the next one and it's possibly a plan with a crisp leather.

The plan is set off with a fixed height and width, and is so called “fixed MLM plan”. The matrix as you know have an n*m structure.

m - depth or height of the column/member legs

This structure gives the exact ratio of the plan and the downline structure too.

Again, Alex is here to join one more network with a new plan (thank god, one shall have up to three plans and switch between them as separate business networks).

Here, he joins inside a Matrix plan based network.

The structure of a 2*3 matrix plan looks like the below image, This is highly customizable and stands up to the of a marketing business.

On the context, if the plan dimensions are completely filled in then, "spillover" takes place. What if you're pouring water from a bigger vessel to a smaller? When the small vessel is overwhelmed with water it will overflow and spillover.

You just attach or place the smaller one in the larger vessel and the water won't be wasted. A perfect "spillover trivia" - one may say so!

Alex is now happy and enjoying the business profile and even there are many other ways to expand his workaholic nature.

Now, onto the part where bonus and commissions set off.

Level commissions: The commissions are set off once the downline member line-up completes a set of criteria and useful for the upline members too.

Matching bonus: The bonus received for adding new members in the downline and possibly available for upper-level members.

Position bonus: Bonus received for adding a new member in the "x" level of the matrix cycle.

Matrix bonus: Once the matrix cycle is filled completely, this extra bonus will be received by the user.

That's the story of the matrix plan.

Finally, we shall wind up the article by checking on yet another plan which is kind of "mixed plan". Yes we're talking about "Hybrid plan".

A plan that has the ability to include multiple together to opt out every drawback of single pan structure.

We shall give it a brief note using the man with golden working ability - Alex!

Alex has lately been disturbed by certain drawbacks of the existing plans and what he needs is a custom plan that has got the essence of two major plans. He chooses to overlap Uni-level plan with Binary and make it a little customized too.

Potentially, this Hybrid plan is the best option to get in and make a viable option for him.

There is no breakaway and leg imbalance. The structure looks like the Binary plan and it gets a depth touch. The levels extend from primary, secondary, territory and so on.

It is thus considered as the best plan and will outrank among others.

Fast start bonus: Bonus achieved for gaining the member joins in a quick round of time, meeting the time period and a certain level of member level completion.

Custom bonus: A custom filter to create a new bonus structure for your own identity and requirements matching.

That's all about major plans and well, there are yet many other plans that can boost your business as well as for "suitability purpose". And to manage these plans we recommend you to enroll in one of the best MLM Software to keep everything on track.

It's not just about the introduction of plans but also for other major lines of areas with a phase of reliability, scalability, and adaptability.

Because the package comes with plenty of features and integrated with latest technologies.

Hope, this guideline will help you in choosing a marketing plan for your marketing business. We'll have a look at the other plans in our coming articles.